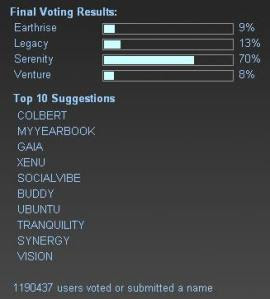 At the end of an online contest held earlier this year, NASA has the answer to the great question of what to name the next addition to the International Space Station. Out of 1190437 votes cast, 70% of voters chose the name “Serenity”. While there is still possibly a pool going on to determine if one of the toilets in the new node will be named after TV comedian Stephen Colbert, the name for the node itself has been selected.

This site uses Akismet to reduce spam. Learn how your comment data is processed.