In keeping with my love of hacking, I really enjoy tearing things apart. If I can repair them to good-as-new, or improve upon them while I’m in there then so much the better. As such I really enjoy seeing photos of other gadgets being dissected for study. There are many such examples across the ‘Net. Probably the most well known were the guided tutorials on how to open up various iPod’s (generally for battery replacement…iPod owners know what I mean). 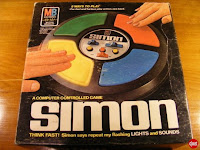 Here is an example of a pretty cool overview of the inner workings of Milton’s Bradley’s Simon from 1978 as published recently on CNet. I fondly remember playing with a Simon as a youngster and was pretty envious of any friend/acquaintance who was in possession of the “Computer Controlled Game”. In the 80’s sense when the idea of computing was becoming much more mainstream this was considered a pretty nifty example of what computers could do. For the time, I guess a T.I. SN7549N chip was pretty high-tech for the masses. 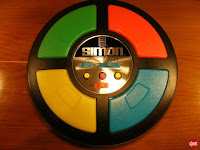 Here we see a great overall representation of the simplicity of design for Simon. A simplistic little box with bright colours, blinking lights, and the all important beeping that was a great foreshadow of attention deficit issues to come. 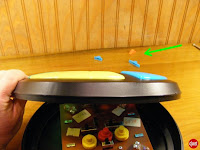 Many of the parts are held in place solely by the fact that the case was closed. Opening the housing allow all of these parts to leap to the freedom of the many nooks and crannies of the hackers work surface. 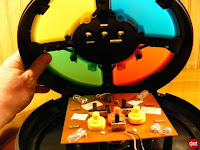 In as much as I was in awe of the Simon and it’s capabilities as a young lad, I never cease to be disappointed when I open up something like this and see so little inside. Even a Merlin (hands up if you remember those!) had sets of LED’s inside giving a better illusion of high tech. 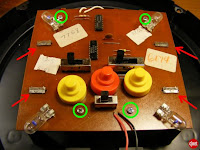 The little green circles highlight the 4 screws that hold the circuit board into the housing. The red arrows point to the conductive metal “switche 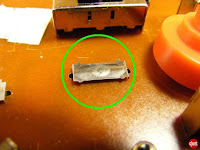 s” that sit directly under each of Simon’s monstrous buttons. Very cheap and nasty in construction but very effective and surprisingly resilient I suspect. To the left is a closer photo of the “switches” that were mounted on the circuit board. 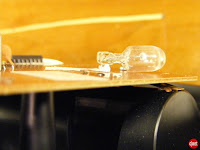 Here we see the small light bulbs that give folks the ability to play with Simon in a darkened room. CNet reports that the packaging makes mention of parts shifting during shipping. It seems likely that these bulbs are what they were talking about. 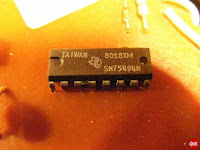 Here we have the brain of the beast itself. The Texas Instruments SN7549N. How many of us didn’t want to putz around with one of those at some point? 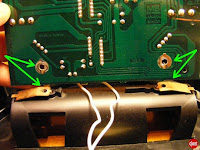 The 1980’s showed everyone just how simply things could be produced when required. Apparently Milton Bradley had this concept well under way in 1978. The power points on the circuit board connect 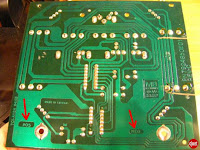 ed with the battery housing simply by the pressure exerted by having the case assembled. I bet this caused a good many Simon’s to go a little wonky after having spent life in a damp basement. On the right we see that the connecting points were even identified as Positive and Negative, presumably for testing as the board couldn’t be installed into the housing incorrectly. When’s the last time anyone saw a board so courteously labeled? 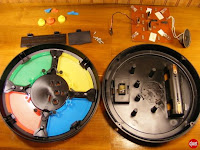 Here we have Simon exposed for all to see. Amazing to think that some plastic, light bulbs, and one I.C. (batteries not included) could keep so many people so entertained for so long. A simpler time indeed!

This site uses Akismet to reduce spam. Learn how your comment data is processed.